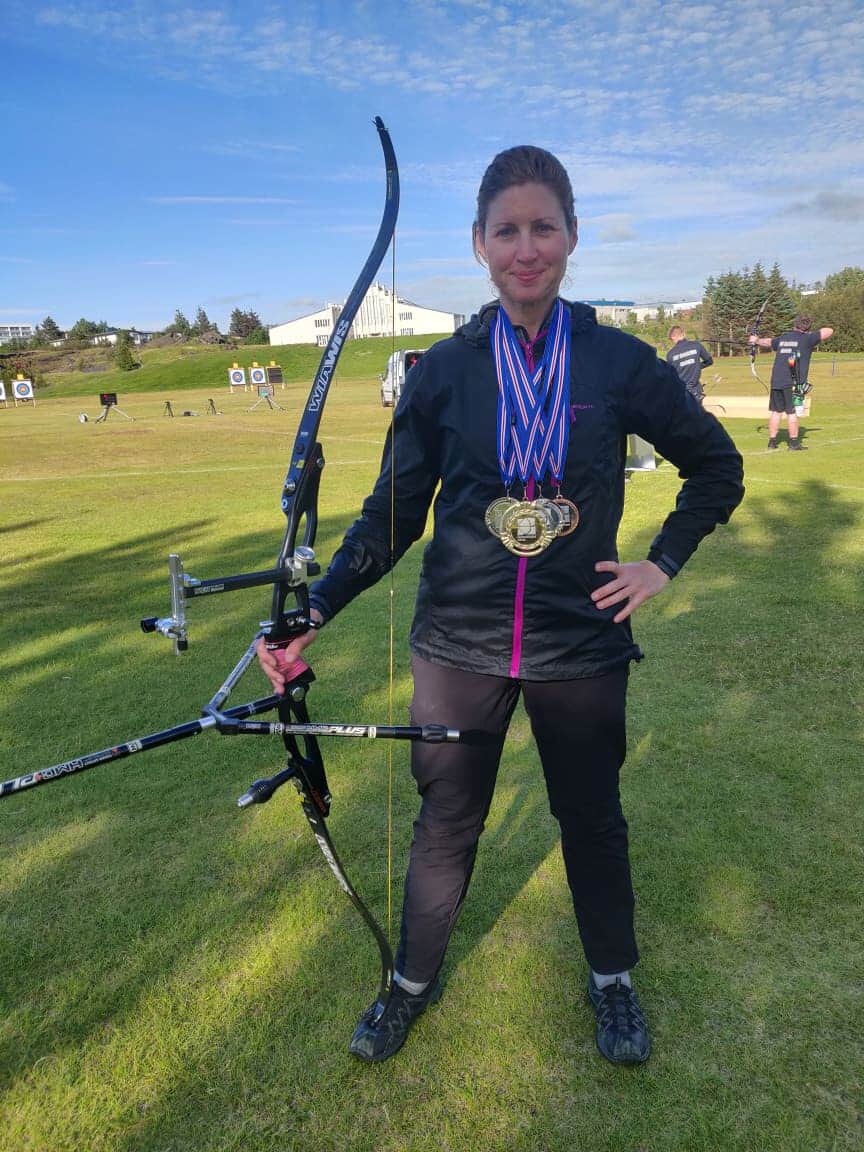 Back in 2016, when I first came to Iceland to compete in the Reykjavik International Games, I was never told about the Icelandic Weapons Law. This meant then when I moved to Iceland and was employed as a coach, I was actually breaking those same laws while doing my job.

When the police informed me of the laws in July 2020, I immediately changed my coaching sessions to be 100% compliant with current laws, I personally informed all the parents of my under aged clients and requested an amendment via the Ministry of Justice.

Even though a new bill was presented in parliament December 2020, the Weapons Law is still in effect therefore kids cannot shoot certain bows. There are no exceptions to this law. Public comment was opened for all to voice their opinions until March 4th, 2021. Although there were 8 submissions, 3 of them came from the same person.  Here  you can read the submitted comments: https://www.althingi.is/thingstorf/thingmalalistar-eftir-thingum/ferill/?ltg=151&mnr=386

Below you can read the English version of my submission.

As the current Icelandic National Champion, National Records Holder, and as a coach for over 30 years, this is my personal and professional opinion regarding Weapons Act 16/1998 Art 31 and the proposed Bill to change it.

Anyone can practice archery in Iceland. Weapons Law 16/1998 Art 31 simply prohibits those under 16 years of age from using bows with a force greater than 7kgs. As youth compete indoors at 12 meters, legally acceptable beginner bows are both safe and effective in providing a solid basis for developing future archers in Iceland.

Since 1974, Iceland has competed internationally, has produced respectable results and has created a rich archery history too. The current law was established to prevent another child from serious eye injury no matter what parental controls may be in place (Hæstiréttur 1974/356). Since then, another major incident has thankfully been avoided. As bow weight is clearly marked on bows and any questions are easily answered using readily available hand held devices, it is not difficult to obey current law while youth are training.

As from 2012, new archers have changed the perceptions of what archery is about in Iceland.

While obtaining my first Icelandic visa as a coach 2016, I was never informed of Art 31 by my employers, ISI, the Archery Committee, other coaches or club Presidents.  As someone who has never broken a law previously, it was shocking to discover this law on July 16th, 2020. The Police specifically stated that there were “no exceptions to this law.” Upon legal advice, I personally informed the parents of my under-aged clients on the same day. Less than two weeks later, on July 29th, 2020, I sent a request for amendment to the Ministry of Justice for the draw weight age limit be lowered to 12 years of age. Along with the request, I included a  comparison  for 30 countries (France 10, Australia 12, Japan 14,…) and a fellow international coach’s opinion as to why the physical, mental and emotional development of children led to an advised age of 12 for competitive archery training. This amendment was a true collaboration and I greatly appreciate the responses given within the global archery community.

In the months since, I have refused to coach underage shooters using bows that are over the legal draw weight. However, as youth shooters continue to train at Bogfimisetrid and have competed at the outdoor Icelandic Nationals and in multiple indoor events hosted by the Archery Federation, it has became clear that those in positions of governance find this and other illegal behaviour normal. As the law has been known for many years by members of the Archery Federation, why does ISI and even by the Speaker of this Committee: Steinunn Þóra Árnadóttir, allow her own son and other children, to continue shooting bows far beyond the legal limits?

With the law not being respected by adults today, what hope is there that another accident will not happen?

Since the proposed bill allows archery as long as an adult is supervising youth for training and competition… the rationale of changing the law has less to do with safety concerns and more to do with making future sporting champions.

The Archery Federation has already commented that participation by Icelanders at the Youth Olympics is blocked by the current law and that age restrictions are not the same as in other Nordic countries. If these two factors are interrelated, why were no archers from Norway, Denmark or Finland at the last Youth Olympics?

With only 32 places are available for the Youth Olympics, obtaining qualifying scores and winning slots are incredibly difficult. Out of a possible 720 total points for 72 arrows at 60 meters, the female minimum qualifying score is 600 (current Icelandic youth record 490) and male is 610 (current Icelandic youth record is 561). Even if a local archer makes those scores, the European Qualifier has only 3 places available and 16 places at the World Youth Championships. For comparison: Marathon, Greece – European Qualifier 2017 top Male score 663 and Female 666. Rosario, Argentina – World Qualifier 2017 top Male score 698 and Female 686. Buenos Aires –  Youth Olympics 2018 top Male score 691 and Female 675. Iceland must be realistic in considering its climate, funding, and the relative value to performance of creating a covered 60m indoor training facility for an outdoor sport, in order to develop a world ranking youth archer by changing a National Law currently in place to protect all Icelandic children.

In regards to the Nordic Youth Championships, Iceland has participated since 2018 with kids beginning at 13 years old. As the competition is a first opportunity for many archers to participate internationally, its significance must be taken with correct perspective. Of the 28 categories in 2019 Aalborg, Denmark, 18 categories had less than 10 participants and a single participant in 6 categories. Of the recurve 60 meter male youth category, 2 of 22 made the Youth Olympic minimum qualifying score, while no females of 22 scored above 550. As a 16 year old would compete in this category, bow strength would not be a factor in achieving distance in respect to the current Weapons Law. For archers in the 13-15 year old category, their outdoor distance is 40 meters. Yes this is a challenge for bows under 7kgs, but a performance plan which promotes international participation for this age group, goes against current doctrine.

As for competitive compound bows, manufacturers generally begin at 13.6 kgs (30 lbs). As this is not an Olympic sport, it does not get the same attention as recurve. Even so, ISI should have in no way allowed a 14 year old to represent Iceland at the 2019 European Games in Minsk, Belarus, on a compound bow which doubled the current legal limit. I was recently told that because she was legal over there, that it was OK to coach her while in Minsk. For clarification, the previous 4 years of coaching her in Iceland was illegal.

Additionally, international talent promotion programs for Olympic sports have shown the most success with ages 6-10 focused on Fitness & Fun, 11-14 on Formation, 15-18 on Specialization and 19+ on High Performance.

Starting from a younger age is not how champions are made as “…early participation in competitions and inclusion in talent identification and talent promotion programs correlated negatively with long-term senior success. Only the training volume in other sports (beyond the current main sport) displayed significant differentiating effects on later success in senior elite sport.” Væyens et al., 2009

Sport achievement cannot be used as rationale to ‘update’ a law that was originally put into place to protect children from life changing accidents. ‘Updating’ a law cannot be used as rationale to allow current illegal activity to become legal even though it is already deemed acceptable behaviour for certain members of Icelandic society. As Iceland allows convicted criminals to become coaches and for them to decide the direction of future laws, it is logical that this current situation exists today.

All parents should be informed of the current law and its purpose every time they buy a bow for their kid. Anything else is simply adults teaching kids that the law means nothing.

And, finally, under no circumstances should any foreigner ever discover that her job is in violation of the law. Coaching allows me to be an athlete. As current National Champion and current holder of both Indoor and Outdoor Records, I, at first thought it would be an honour to represent Iceland internationally. Instead, I have now chosen to never compete for Iceland again. I have never experienced sporting organizations treat an athlete the way I have been treated simply because I choose to obey the law. Everyone who allowed this situation to happen should be ashamed of themselves. I sincerely regret ever coming to Iceland.

As I continue to coach in Iceland, I will continue to obey Icelandic laws. There will be no exceptions.

*** To qualify for a work visa, police checks (FBI, Interpol, National Police) are always required no matter what profession you may have. For any foreign coaches coming to Iceland, please be aware of the current Youth Law for athletes under 18 years old. Adult athletes do not have these regulations but clubs can make their own rules.  Please note that the ethical standards between different countries are not equal so be prepared to question any sports organization which promises you employment.

Begin typing your search above and press return to search. Press Esc to cancel.